Since coming on board at Endeavor Sports Performance, I’ve personally assessed a few hundred, and as a whole staff we’ve probably observed thousands of individual hips and rotation screens. To make a sweeping statement, many of the athletes we see at Endeavor present themselves with some form of limited hip internal rotation range of motion. I can remember specifically the individuals that have presented in the other way (more of an anteversion of the hips).

With that being said, these exercise drills can be performed prior to the beginning of your warm-up, as generally speaking these are the actions we would take with an athlete whose hips present in such a limited capacity.

1. How each individual femur sits in the hip socket (acetabulum) and
2. Observations of any rotary patterns evident from a combination of hip rotation data. 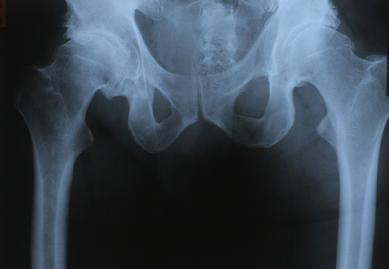 Identifying a hip rotary issue gives someone such as myself more information to assign an intervention that has more likelihood of improving said observed pattern. In the above picture for example, is a classic Left AIC pattern as described by the Postural Restoration Institute (R).

WHAT YOU NEED TO KNOW:

2. Reduce posterior hip and capsule “tightness” to allow the femur to “glide” as the hip enters into hip flexion.

3. Activation of hip internal and external rotators via static and dynamic exercise drills. 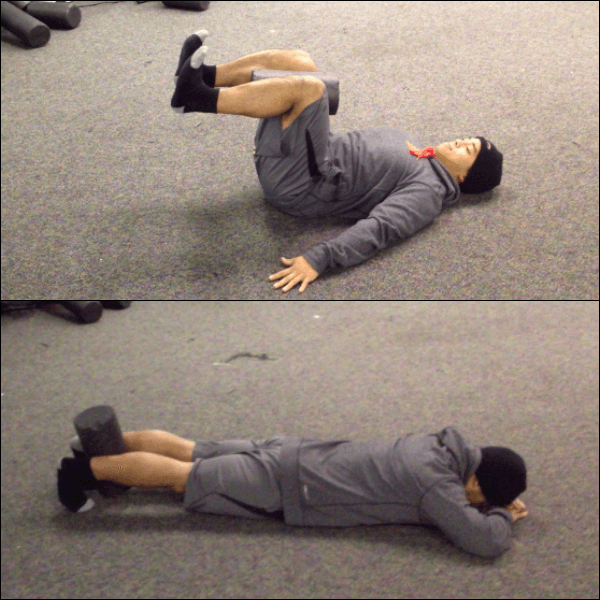 These combined steps could be a great starting point for those who display a lack of hip internal rotation. Reason being is that these exercises demonstrate a blend of mobility and stability exercises that can cover a lot of ground in a little amount of time.

With the information on how to perform a self-assessment of hip IR at your fingertips, these are the next steps:

Further, there will be large variables from athlete to athlete, from dancer to dancer. A left handed pitcher who was a multi-sport athlete in high school, who had  played baseball since 8th grade (age 13-14) who is now a high school senior (now 17/18), with minimal contact injuries, will have drastically different hip rotation results when compared with a 12 year “veteran” high school senior, right handed pitcher who has only played baseball, pitching hundreds of innings since the age of 6. While the example is a bit extreme (or is it?), it is highly likely for this example to exist in an athletic setting, especially when taking into account the push for early specialization in sports nowadays.

In another possible daily activity scenario, a shift in hip rotation values could be explained via long term adaptations associated with placing one leg up on an adjacent chair while you type for the duration of one work day – 8 hours a day, for 5 days a week, 52 weeks a year. Even if a bit exaggerated, the point should get across that muscles can get tight for various reasons, not just limited to athletic activities.

To relate this scenario to my dancing friends, I can imagine that hip pathologies would relate to too much mobility as our bboy child prodigies grow older over time.

Essentially, there are two ways that I would approach this, and it correlates with identifying a soft tissue restriction, and then identifying any pattern restrictions, if I can call it as such. From the observed patterns, I would break down the appropriate plan of action towards utilizing a mobility corrective or stability corrective.

If there is a capsular or bony block, there is not much I can do from a corrective exercise point of view, as this correlates to bones grinding or clicking on each other, (refer to last article’s “Further Reading“). Based on the specificity of my findings, often solving the rotary hip issue can improve the “luxations” or anterior hip clicking. If the issue is severe enough, I will resort to “punting” the issue to a higher governing authority with a greater scope of practice, or merely to someone with greater experience than myself. 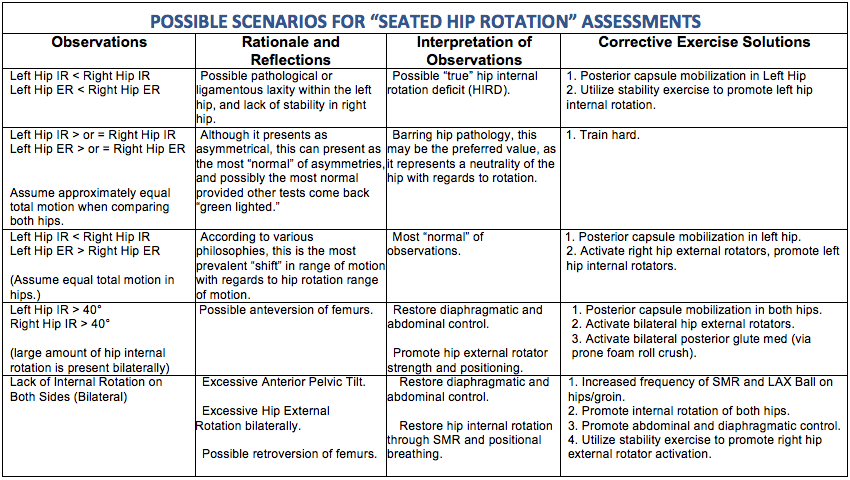 The goal is to train hard.

So, there are two caveats with these scenarios for hip IR/ER values. 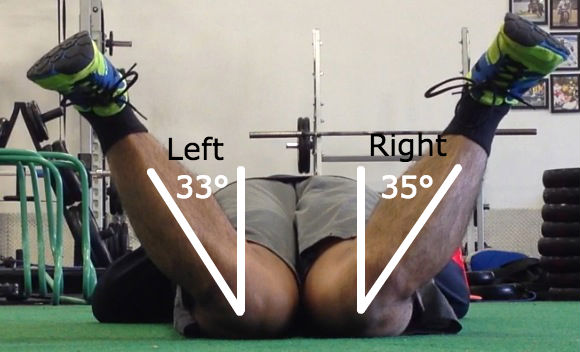 Seated Active Hip IR is a good measure of hip internal rotation with the hips flexed. The prone hip IR test is meant to measure hip IR while the hips are in an extended position. You will usually find that the measurements are slightly higher in the latter test, due to the hip musculature being put on “slack” and not “tight” due to position, and ultimately range of motion may present as slightly higher.

Secondly, results can vary from person to person, as values are specifically linked to an individual’s genetics, sporting endeavors, and lifestyle choices.

Solutions to a Soft Tissue Restriction

This is possibly the “easiest” to identify and solve out of the problems that come along with a lack of hip internal rotation. With my own personal bias, I secretly wish each hip mobility problem could be resolved with foam rolling and lacrosse ball work alone. However, as I described above, this is not always the case.

Reason being, muscles and tissue can present as “tight” or “tonic”, and if sitting on a lacrosse ball for a few minutes provides a positive response prior to the “offending” activity (dancing, squatting, sitting in a car for 5 hours), and if hip internal rotation is still in good standing, then it is likely that the solution to the given problem was correct (or at least headed in the right direction).

In this case, if the hip ABductors and internal rotators (TFL, Glute Med/Min) present as tight, perhaps performing self-myofascial release on these muscles will resolve it.

Hopefully it is this easy.

Solutions to a Pattern Restriction

However, with regards to the the population of youth athletes and dancers that I’ve performed assessments on, a lack of stability is the most likely culprit. More often than not it is a stability issue from weak gluteal muscles not having control over the femurs, or weak diaphragmatic/oblique activation acting on the position of the pelvis and ribcage.

These are the items that generally go through my head when I’m interpreting data from an assessment. 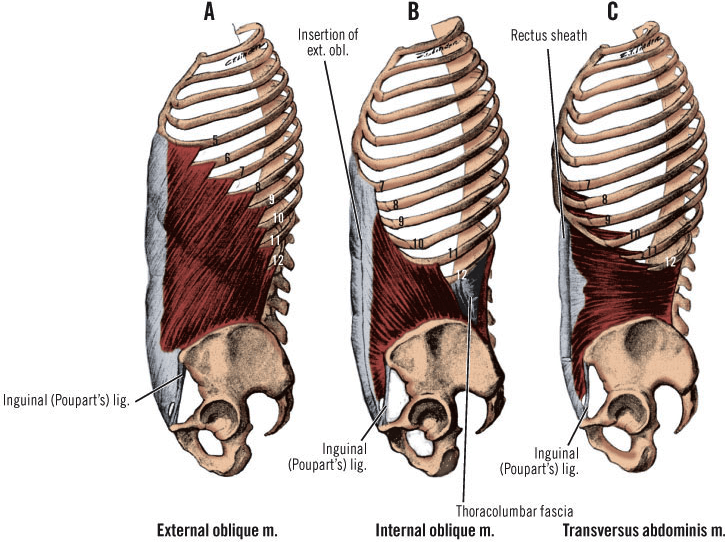 If they are both showing up weak, how will the hips present posturally?

Within different philosophies, there are likewise different approaches to restoring hip internal rotation. In days of past, the idea was to simply stretch the tight muscle and then strengthen the weak muscle. Now, the idea is to incorporate multiple systems within the approach: reduce tonicity by promoting movement via the parasympathetic system, reducing sympathetic tone (think reducing your need for fight or flight tendencies) and to extrapolate further, through various positional breathing drills to enhance static and dynamic position to improve hip internal rotation range of motion.

After all of this, the question remains of whether or not this singular test and action will help you perform better. I believe the answer is yes, and no. YES it will help you perform better by taking mechanical tension off of the offending and often chronic tight muscles, and by doing so your proverbial “tank” will be increased for performance. And NO, because this is merely one test that can be performed among many, many others.

I’ll be utilizing these same ideas within my FREE manual,

to help derive the biggest problem that is holding
you back from developing your rotational power.

Please leave your name and best email below to receive
notification when I release this manual for athletes, dancers, and lifters alike!