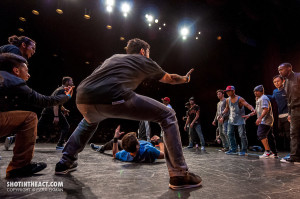 Poppers, Lockers, and B-Boys battle it out for the right to represent the United States for Respect Sixteen, Korea during the R-16 Funkstyle Eliminations and B-Boy Cypher King Battle on June 8, 2012 at The Sports Club and June 9, 2012 at the Palace of Fine Arts in San Francisco, Calif. Photo by Ezra Ekman.