Traditional dance favors starting at a young age and specializing in a few dances (or simply one) in order to peak at a specific age for performance and aesthetic purposes. This is within the mindset that dancing will be a career, either pursued through current university standards, or through external performances.

This view is contrarian towards a model in the athletic development world known as the “Long Term Athletic Development” Model.

One of the easier counterarguments to make towards not accepting a long term dance development model is that the components of other art forms leans towards an early specialization model in order to reach success faster. This idea has found its way in ballet, gymnastics, and other more traditional dances seen within dance schools, since many children begin dance at a very young age. One specific example that will support the idea of early dance development is “shaping the body” in order to influence the structure of the hips and feet at a younger age – this adaptation is not possible due to ossification of bones in an older dancer.

With this in mind, my interest lies within the physical components necessary to creating a successful dancer throughout the lifespan of their career, along with increasing the longevity of said career. (That is, there is more to the development of a dancer than just emotional and mental acuity – that is important for growth as a human, not only dancers.)

To be straight forward, within the breaking community, there is no conceptual “plan” for success as a dancer. There is no strict school of thought that says, “You need to do this in order to be successful in this dance.” Sure, there are a lot of opinions from those “who have made it”, but in the grand scheme of things, there are no real markers when speaking about purely creative movement.

To use an analogy, if you have a specific skill in baseball such as the ability to throw a 90mph fastball, there is a higher chance for you to reach “success” as you rise in the ranks and age groups. Your success is contingent on striking batters out with your fastball, and the more people you strike out, the more success you will see.

On the other hand, if you learn how to do flares all day, that will not necessarily equate to a successful dance career, as there are many other factors that come into play how someone “judges” your success as a dancer. There is no one to truly “compete” against, and there is often no clear cut winner in battles or competitions.

The thing that I love about this dance is that there are conceptually zero rules to adhere to within pure, creative dance. 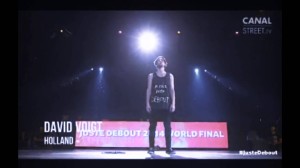 This gentleman literally had “Je suis JUSTE DEBOUT” written on his shirt, which translates to “I’m just standing here.” as his dance solo… At arguably one of the biggest hip hop dance events in the world.

Fortunately, while there are next to zero rules for the conceptual aspects of success within dance, there are actual physiological screens and markers that are measureable towards the concept of movement quality and healthy movement patterns. By developing a battery of assessments, you can identify any limiting factors that may be holding you back from successfully completing your job as a dancer, not only in competition but also in performance.

The construct of creating a judging system for dancing is arbitrary if the dancer keeps on getting injured, or if they cannot “keep up” from a physiological level because they have to adhere to a specific aesthetic construct, which may further be hampered by their lackluster nutritional and lifestyle choices.

Within the realm of modern day athletics and exercise sports science, there has been a shift towards increasing the longevity of the athlete, with recovery methods reaching numerous types of modalities, and “screens” being developed in order to identify the most limiting factor with regards to “elite” level performance.

In reality, the common thread between sports and dancing is that movement equals movement, something that I have been saying since my undergraduate days, far before I understood any of these items of gross movement patterns or screens.

If there is a human doing this movement, then the movement should ideally have some conceivable data that can be derived from analysis through movement and physiological screens (to identify any limiting structural or physiological restrictions), and then movements specific to the dance second (to identify if the terminal skill ends within the specificity of the movement, as opposed to simply being fatigued due to lack of physiological training).

That is to say, I’m not only interested in developing the creativity of a dancer early on in life, but I’m also interested in the longevity of dancers as they age and decide to dance for life, not only for a short period of time.

Unfortunately, this same ideology (and others) has not yet transferred to the dancing community, at least the community that I am exposed to (there are several sub-communities of dance that are specific to each art, region, etc.). There is no such idea of a “long term dance program”. The rigors of exercise science are meant to enhance the dancing capacity, not detract from it.

Since my experience resides mainly in bboying, the idea of dancing as a lifestyle (eg, dancing to pay the bills) has only recently been entertained. Many bboys in the early 80s have noted that their “lifespan” for their dance career ended around the end of their high school senior year, either due to financial reasons, the dance beating up their bodies, or other logistical reasons – like doing it just for fun and not as a full-fledged “lifestyle” choice, since after all, there is no hard outcome such as getting paid to dance as a professional bboy.

Prior to discussing the specific aspects for success within the art form known as breaking, it is necessary to understand what the definition of movement entails and what steps can be taken to increase performance.

In reality, there are several, big-picture themes at play for any dancer within the breaking community to elongate their dancing career, and thus, if they can dance longer, they can devote more time towards perfecting their craft, and lastly to reach whatever definition of “success” they want.

Specifically, these components have been listed by Kevin Neeld towards dissecting successful athletic performance, and for the purposes of this article I’ll reiterate these qualities here:

Rather than regurgitate what he has eloquently written about with regards to performance limitations, I’ll link to it HERE.

Longevity in a Successful Dance Career

It should go without saying that with a longer dance career comes more setbacks and more injuries, often without any inkling of why any dancer is getting hurt despite their arduous training regimen and attempts at utilizing their own specific methodology to “enhance” their aesthetic performance.

If there were a true “school of dance”, there would ideally be less emotional attachment to specific methods towards greater movement performance, and more attempts at objectivity towards what may be the true components in creating a successful (and more or less, battle/competition/stage ready) dancer. Certainly passion plays a critical role, but since passion is a difficult albeit impossible quality to measure, my attention will go to any physiological or functional assessment in its stead.

With this under your belt, I’d like to forward the notion that if movement capacity (think FMS and PRI screens and assessments) can be altered, then specific movement capacity can be altered or enhanced as well (increasing recruitment of internal/external obliques within a Rotary Stability pattern may yield positive results in specific freezes such as baby freezes, or restoring thoracic rotation and activating bilateral glute function can help improve rotation seen in windmills, flares, etc.), along with the ability to produce more force and thus more speed in different movement patterns found within the dance.

So, if the general movement capacity of an individual can be improved as well, then the next logical step for performance enhancement will include altering the physiological state that an individual undergoes to perform with less fatigue and more energy. One cannot simply “will” the body to increase efficiency of the energy systems that the body goes through when dancing or competing – there needs to be a specific adaptation aimed at increasing performance.

Where does this leave us?

In any case, many of the upcoming blog posts will be detailing the rationale behind this initial post on long term dance development.

I have briefly discussed the benefits of strength training for dancers HERE, which has components within the movement capacity and physical capacity subsets that are listed above. The idea is to create a stable foundation for realizing multiple movement patterns in as rich of a proprioceptive rich environment as possible, in which further movements can be explored, which is a critical factor for being creative.