Before going off on why bboys shouldn’t be running to “get in shape” or condition themselves, here is a very brief synopsis on energy systems and metabolism:

There are 3 distinct yet closely integrated processes that operate together to satisfy the energy requirements of muscle. The anaerobic energy system is divided into alactic and lactic components, referring to the processes involved in the splitting of the stored phosphagens, ATP and phosphocreatine (PCr), and the nonaerobic breakdown of carbohydrate to lactic acid through glycolysis. The aerobic energy system refers to the combustion of carbohydrates and fats in the presence of oxygen. The anaerobic pathways are capable of regenerating ATP at high rates yet are limited by the amount of energy that can be released in a single bout of intense exercise. In contrast, the aerobic system has an enormous capacity yet is somewhat hampered in its ability to delivery energy quickly.

Given repeated reproduction over the years, these early attempts have lead to 2 common misconceptions in the exercise science and coaching professions. First, that the energy systems respond to the demands of intense exercise in an almost sequential manner, and secondly, that the aerobic system responds slowly to these energy demands, thereby playing little role in determining performance over short durations. More recent research suggests that energy is derived from each of the energy-producing pathways during almost all exercise activities. -1

What can we learn from this simple article?

Since there are almost zero studies on the energy demands on bboying, we can extrapolate our research from similar sporting events, such as gymnastics, wrestling, and possibly MMA fights, in regards to the energy demands and dominant metabolic system(s).

Gymnastics is an explosive sport, incorporating flips, tumbles, turns, among many other precision-oriented techniques that take years to master. Movements generally take anywhere from 2-5 seconds, requiring either maximal tension at some points to dynamic tension in others. Stringing together movements during a floor routine or similar event will tax the anaerobic system significantly more than the aerobic system, due to the nature of the sports explosive qualities.

When coaches say “Try jumping slow,” during certain cues/exercises to make a point, the same can be applied to gymnastics. “Try flipping in slow motion.” It cannot be done without full body explosiveness, with the weight of a win or loss dependent upon correctly fine tuning difficult exercises, often in mid-air.

Wrestling is a ground-based sport, developing lots of bodyweight primal patterns such as crawling and rolling. The primary objective is to win through judging standards or by forcing the athlete out of the arena. Although many may reason the efficacy of weight control and endurance running within this sport, the energy demands of this sport reflect both an explosive quality along with the endurance to fight for 3-5 minutes (depending on sport, rules, regulations, etc.). Without a doubt this sport favors the explosive (and technique) oriented athletes. Same can be applied to MMA training protocols.

Now, let’s examine bboying. Although there have been no studies done on the energy expenditure on breakdancing, we can still evaluate our energy demands on the artform in a few ways, and analyzing the movements will reveal a few things. Similarities in movement derive from a number of sources, ranging from salsa steps, gymnastics, and ground-based primal movements. All of these combined exemplify the energy demands needed to successfully breakdance. Further, there are a few things that differentiate this dance from other movements or styles of dance. 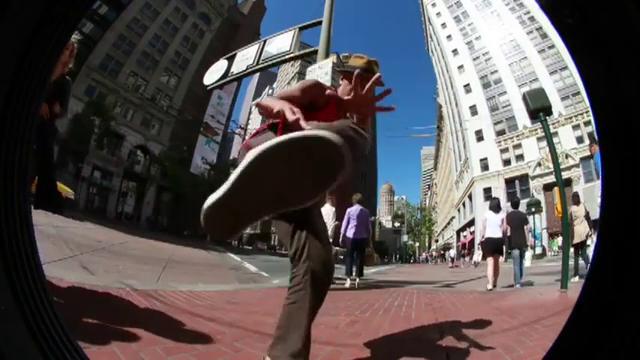 So, using myself as an example, a full on set for myself would take roughly about 30-40 seconds. If it was a power set it would be less duration , just due to my own individual style. Keeping these time durations in mind, it is time to train for these energy demands in a few ways:

How will this help conditioning our bodies for dancing? By keeping the general conditioning specific to the sporting demands we can then begin to fully develop our potential, along with not competing for energy demands within the body.

With all of this in mind, let’s examine why running for long distances will be detrimental for bboying and dancing in general.

The reason many people approach running in general as a form of cross training is for a few reasons, mainly to increase mental endurance or toughness, and the feeling of “sweat” or “soreness”, which are both sensations that largely do nothing to create the positive training effect that we are training for (mainly, more power and stability in our movements, and less injuries throughout our career).

That is of course, unless your footwork sets extend that long. Even then, the demand should match the exercise, and running is a linear exercise, as opposed to the three-dimensional, ground-based movement that is bboying.

If you are looking for cross-training methods or movements outside of bboying to further improve your art and movement, perform ground-based movements such as Turkish Get-Ups and Mountain Climbers.

(Keep the movements similar yet basic if aiming for conditioning, and when practicing technique-oriented movements such as footwork drills or powermoves, increase your focus and make sure to be fresh during practice.)

Yes, aerobic metabolism will help shuttle oxygen to the previously used muscles, but we will be using this system during rest periods anyway. However, this does bring up some counterpoints to my argument:  Do we need at least one aerobic-focused day to develop this aspect of the metabolism?

Perhaps, but only if all the other aspects of training and injury prevention are accounted for as well, as the body’s ligaments, tendons, etc. will need general recovery on top the body’s metabolic system. Further, let’s take into account an amateur or even professional bboys’ dancing career, and what adjustments I would make to further enhance their metabolic system:

If one is aiming to “get in shape” (and I’m assuming this general phrase is used to either refer to losing body fat or increasing one’s anaerobic metabolism in regards to dancing) for bboying:

In closing, a dynamic art form such as bboying takes up both anaerobic and aerobic measures – there is no way to turn one off completely in relation to one another. The more anaerobic an activity is (sprinting, windmills, flipping), the higher energy demand is needed, and likewise the larger the rest time. However, we must develop the anaerobic system much more than the aerobic system to prevent our dance from deteriorating. Further, keeping our nervous system “fresh” will help create crisper moves. I can’t imagine going for 10 rounds in a 1v1, staying fresh, and having moves upon moves. That is, unless my name is Bboy Cloud.

This is where art meets science, as a dancer is not restricted by rules or regulations in their own practice. If a dancer stays creative, there is nothing saying that being stronger, faster, or more powerful will lend itself to more victories. Slow, robotic movements can certainly be funky.

However, in terms of general length of dance careers, along with keeping joints and movement healthy, I would generally avoid running and jogging as a whole in order to avoid injuries(-2) and staying strong and powerful throughout my dance career.