What You Need to Know:

If we were to play a little word association game with “core exercise”, do any of these come to mind first?

I’d estimate that these exercises are still seen fairly frequently in many commercial gyms and workout DVDs and videos online to this day.

However, the following exercise has application in many circles: from being used as a rehabilitation progression, to being used within many advanced athletic programs, and can even prepare you for a blindsided tackle. Basically, it is a jack of all trades, and used in more things than just a bootcamp.

Perfect to include for your warm-up, or even in your exercise program when you add in a weighted sled.

Learning the intricacies of this movement, along with activating requisite muscles to strengthen the mind-body connection will help accelerate you later on as you grow and develop as an athlete. This  is akin to how someone may be thrown into a back squat position with 405lbs, which spells disaster if you’re not physically prepped for it. You’re better off starting off with a Goblet Squat, then going to a Barbell Front Squat (maybe even to a box!), and then going straight into a Barbell Back Squat.

At Endeavor Sports Performance, we utilize many variations of breathing exercises, and seemingly “primitive” movement patterns. One of the cool things about these exercises is that they relate very closely to the moves you might see in a cypher or breakin’ event. 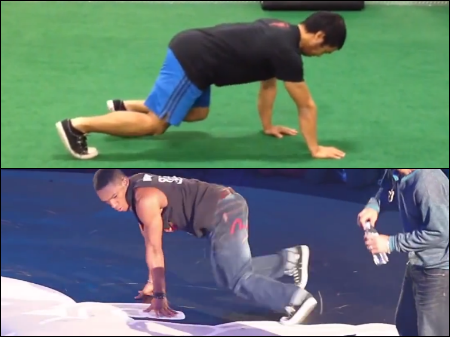 Besides just reppin’ your crew with some fresh moves, these regressed moves (we’ll call them crawling patterns from here on out) are actually beneficial for both bboys and regular folk trying to get their swole and functional movement on.

However, what happens if the upper traps dominates these movements?

Sahrmann and Janda notes that if the upper trap dominates a static or dynamic posture, the cervical flexion muscles are inhibited or reduced in tone. According to the superficial front line (Thomas Myers’ Anatomy Trains), if the cervical flexion muscles are inhibited (SCM), then there will be compensation up or down the kinetic chain – in this case further down the chain (weakness of the obliques, which serve to pull the ribcage down).

Note the difference in rib position if you were to look from left to right. You can even follow the lines on my shirt for a more visual description for how to “not move” well in the weight room. 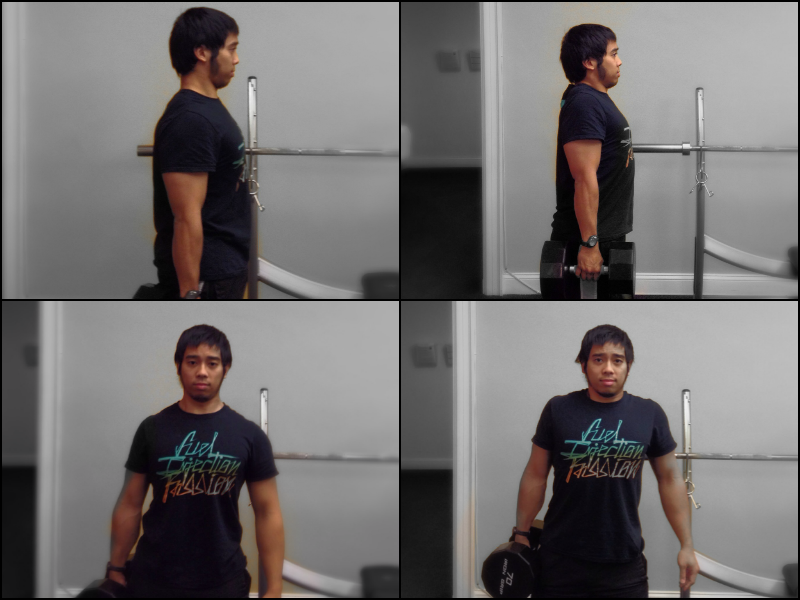 But, I’m working on my “core muscles” by doing these awesomely advanced exercises like the Pallof Press and Farmer’s Walk! Right?

Whether or not you will be performing the Farmer’s Walk incorrectly or correctly… the muscles that will need to resist rotation will be traps, lats, and obliques.

Cuing and Directions for the Bear Crawl

By using the bear crawl, you are resisting gravity in a quadruped position, and your core is resisting the desire to “extend” as you move up and down. Further, when you crawl in any direction you are resisting rotation. So by  crawling, you are getting core work at its purest degree.

So, to introduce the most underrated abdominal exercise you have never done…

For the initial, unweighted variation of the bear crawl, use about 10 steps/side, for a total of 20 repetitions. Maintain a neutral spine throughout, and keep knees up, but glutes down.

As you progress to a weighted version, use about 5 steps per side, for a total of 10 steps. If you do it correctly, it will be tougher to maintain a neutral spine, because of the abdominal pressure required to maintain throughout the crawl; thus the lower repetitions.